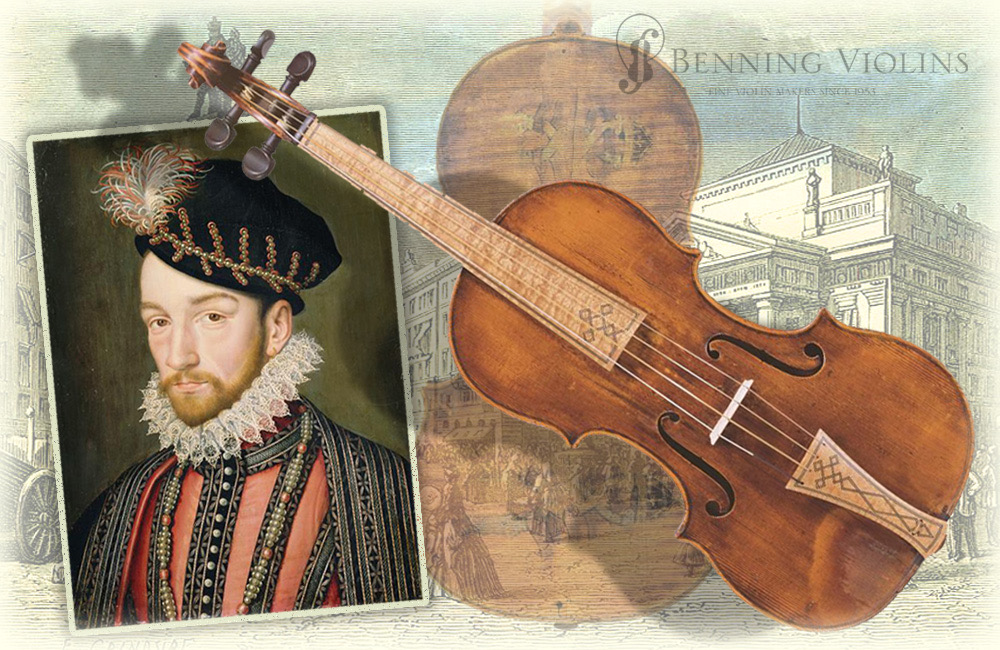 Catherin de’ Medici brought a love of dance from Italy to the French court. In so doing, she drove the enduring standardization of violins, violas, and cellos.

Hard as it may be to imagine, it was a practice in the 18th and 19th centuries to reduce the size of bass violins (bassos) to what we now know the cello to be. This was even done with one of the 38 instruments made by early luthier Andrea Amati for King Charles IX of France.

First, a little history on the collection: The instruments – a full complement of the modern interpretations of the violin, the viola, and the cello – were commissioned by none other than Catherine de’ Medici (1519-1589), the queen consort of France and mother of three French kings: Francis II, Charles IX, and Henry III. The luthier, Amati, somewhat standardized these from earlier stringed instruments, part of how this music was elevated from the peasantry to the royal courts – an enduring legacy seen on concert stages in the 21st century.

But while only nine of those instruments in the King Charles IX collection survived the destruction of the French Revolution (1789-90), one that evidently made it intact to 1801 was the “King cello.” Curiously, Amati didn’t originally make it as a cello but as a “basso,” or bass violin. Larger than the cellos Amati did make, it was literally cut down as bassos had fallen out of favor with musicians and audiences by this time. Rather than it be neglected, a Parisian luthier, likely Sebastien Renault, inscribed on the back of the reduced instrument, “Mended….1801” after the reduction.

That mending process might seem extreme, but in fact was done a fair number of times in this era. The Vienna Symphonic Library posts a description in an article titled “How the violone became a cello,” in which it says:

“One further characteristic of early cello-making should be mentioned: the so-called “cutting,” the reduction in size of large instruments to dimensions which have remained customary to the present day: the top and bottom of the body was cut off, shortening it, the upper and lower bouts were narrowed and the ribs made flatter. Not one of the instruments made before the middle of 17th century seems to have survived this rather gruesome-sounding hacking up of instruments.”

To initiate such a clear alteration of an instrument with such provenance speaks to the favored place of Amati’s standardization of the string instruments – even while disrespecting the larger original size. Andrea Amati was in fact part of several generations of Amati luthiers, however this particular violin maker was known to de’ Medici, herself originally from Italy and one who loved to dance. She is credited by way of this commission with transitioning the higher-pitched violin from its origins in lower-brow culture to the royal courts. The original collection of fine stringed instruments was made up of 12 “large” sized violins, 12 “small” sized violins, six violas, and eight cellos. The collection was commissioned by de Medici for her son Charles IX’s ascendancy to the throne in 1560.

So while only about a quarter of the original collection survives to this day, including one instrument in significantly “mended” condition, the basic structure of the violin, viola, and cello have endured to this day. Credit one queen consort and her love of dance.