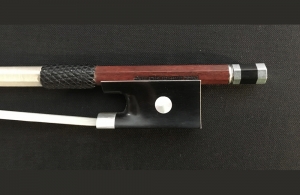 Description: Born and raised in California, Paul Siefried quickly found an interest in bow making and restoration. He apprenticed under the renowned Hans Weisshaar and later started his own shop in Port Townsend, Washington. Paul Siefried entered an International Competition in La Joya, California where he won three gold medals and one silver. He repeated the feat two years later and by his third competition, he was named the "H’ors Concourse” and was invited to become a judge for the competition. This particular bow is a beautiful example of Paul’s work. Beautifully balanced and strong. Produces a rich, clear tone with a great staccato. Octagonal stick. Weight: 60.5 grams.