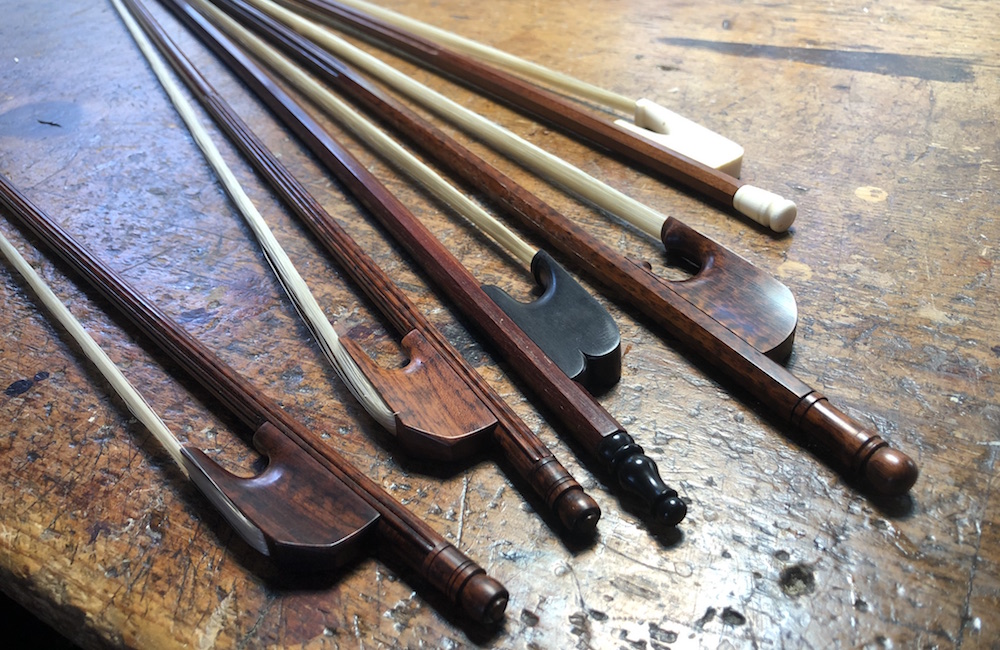 While appearing to be less complex than the violin itself, the bow and its evolution since the 17thcentury illustrate how “the stick” had distinct advantages.

Violins and bows of the Baroque period (early 1600s to the mid 1700s) were physically different from their “modern” counterparts that are largely the standard of today. But when one considers how the instruments were once played – instead of the chin rest and positioning, the tail end of the instrument could be placed against the breastbone or even the player’s hip – the image of a virtuoso in concert is more distinctly about the player his or herself than the instrument.

But indeed Baroque instruments (violin, viola, cello, and stringed bass) were larger, with slightly different contours, dimensions, and with different materials for strings, mostly “cat gut” (which in fact was sheep derived). Peg boxes and fingerboards were different as well.

It was the bows that changed the most as the famous violinmaker Antonio Stradivari and his contemporaries evolved the instrument to its current form and later, in the 19thcentury, when bowmaker François Tourte changed both the shape and type of wood used for the bow (from snakewood to pernambuco).

In simplest terms, the Baroque bow wood was a flat or convex shape and shorter than the modern bow, which is longer and has a concave shape.

Baroque bows performed best at the era’s dance music, where the first beat of the music was heavier and the second beat light. The shorter Baroque bow was designed for this sequence, with the frog end providing the heavier part before the sound lifted as the bow traveled across the strings. Modern stringed instrument bows are more even, from frog to tip – which puts the responsibility on the player to effectively create the light and heavy tones.

A London-based group, the Orchestra of the Age of Enlightenment, endeavors to use instruments from that time (1600 to 1800) to match the compositions of the same era. They use the Baroque violins, bows and other instruments to perform works by Bach, Haydn, Mozart, Brahms, and Wagner, replicating as best they can the original sounds as intended by those composers.

Where are the Baroque bows today? In an essay, “Traditions of Baroque Violin Playing,” by Richard Gwilt and Irmgard Schaller in 2011, they decry how the old Baroque bows met an ignominious end when they fell out of favor with Tourte’s innovations. “The violins themselves were ‘updated,’ sometimes with drastic measures, showing little regard for historical consideration, and the old Baroque bows were simply (and so sadly) thrown out. You can’t modernize a bow.”

While the originals may be lost to the 18thcentury version of a landfill, new bows are made in this style out of the original material, snakewood, for violins as well as other stringed instruments. The Baroque era lives!