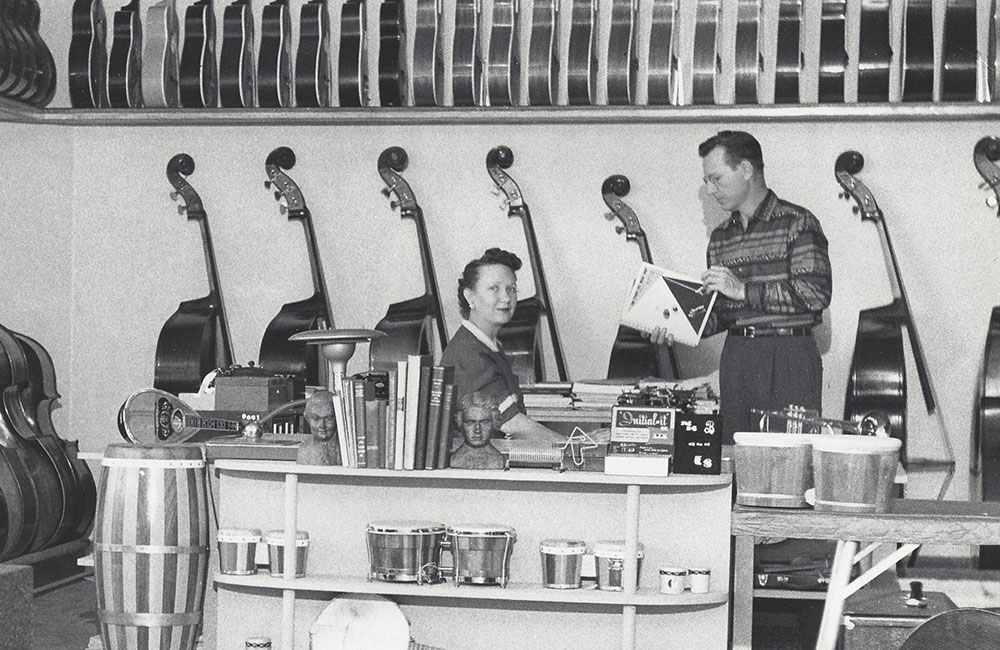 Paul S. Toenniges, the preeminent maker of fine double bass instruments that are collected and highly valued, was a luthier with both European and American influences on his craftsmanship.

Born in DeKalb, Illinois in 1908, his early work experiences included sharecropping in Texas and as a tool-and-dye maker during World War II. Paul had the good fortune of being brother-in-law to Carl Becker, the renowned Chicago-based violinmaker and restorer, initially associated with William Lewis & Son and later Carl Becker & Son Ltd., also in Chicago.

In the 1920s, in addition to working for both William Lewis (by day) and Carl Becker (in off hours) as a violinmaker and repairman, Toenniges developed an interest in playing the bass in a dance band. Upon his brother-in-law’s suggestion, he began to craft basses as well.

Toenniges spoke about his early success with bass making. “I purchased the best European maple and spruce available and proceeded to make instruments,” he told a writer for the International Society of Bassists quarterly magazine (Vol. XV No. 2, Winter 1989). “The first bass I made was purchased by James Palacek, who later became a noted member of the Chicago Symphony.” That was in 1935.

He continued crafting basses from his home in Chicago, making do with American woods, including curly birch, as the war interrupted supplies from Europe. Even while perfecting his craft he went to work in heavy manufacturing to support the war effort. Toenniges also played at Chicago’s Palmer House hotel and for WBBM-CBS radio in the early 1940s.

In 1946, Toenniges and his wife Ruth (Breitenstein), decided while vacationing in Los Angeles to pack up and move there, where he found work repairing instruments for the Wurlitzer Violin Collection Company. Continuing his practice from his years in Chicago, he made basses in his home workshop while working a day job with Wurlitzer.

Between 1935 and 1952, Toenniges made an estimated 45 basses. Some were in a traditional style, while others were in a “diamond” design of his own – named for the unique trapezoidal shape of the f-holes on the top and on each C-bout of the ribs – which distinguish many of his instruments as uniquely “a Paul Toenniges.” Most of the instruments do not carry his signature, including many violins he made while working at William Lewis in the 1920s. He was reportedly influenced by the work of Italian and French master violinmakers, including that of J.B. Vuillaume.

The 1989 article in the Bassist Society magazine listed twenty known Toenniges instruments in existence with their known respective provenance. Of note, his basses have been played by musicians in symphony orchestras in Chicago, Detroit, Bucharest, Buenos Aires, Los Angeles, San Antonio, Oklahoma, Milwaukee and Oakland, and in the Jimmy Dorsey Orchestra (1920s through the 1950s). Classical bassist Paul Cannon, who performs since 2014 with the Ensemble Modern (Frankfurt), primarily plays on a 1936 Paul Toenniges bass.

In 1952, Toenniges decided to shift his focus from making basses to restoring, buying and selling fine European instruments in his own Los Angeles shop. He and his wife Ruth, with help from daughters Jane and Nancy and Ruth’s mother, opened Studio City Music on iconic Ventura Boulevard in the San Fernando Valley. He continued working with his family in the business until his death in 1994.

Daughter Nancy herself studied at the Mittenwald School of Violinmaking, in Germany, in the early 1960s where she met and married fellow luthier Hans Benning. Over the years, Hans and Nancy crafted dozens of fine instruments individually and together. Their children and grandchildren, as well as those of sister Jane, now deceased, carry on the tradition of making, repairing, appraising and selling fine string instruments at Benning Violins in Studio City (changing the name of the business in 2000).

Today, grandson Eric Benning has earned an international reputation as a master crafter of fine violins, violas and cellos.