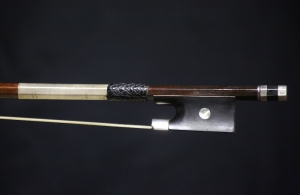 Description: Bow Maker. (1872 – 1951) Émile François Ouchard was apprenticed to Eugène Cuniot-Hury and took over the Mirecourt firm after Cuniot's death in 1910. Ouchard's son Émile Auguste began to assist him as early as 1913, and in 1923 Ouchard 'père' set up his own firm. Bows after this date are often branded, "Émile Ouchard," though he did not abandon the "Cuniot-Hury" stamp entirely. The shop did well, and by 1936 Ouchard employed 15 assistants, including his son. In 1937 Émile Auguste officially took over the business, but Émile François was reluctant to relinquish control, and his son eventually struck out on his own to Paris, leaving the father in charge until his death in 1951.

Many talented makers worked in the Ouchard shop over the years, including Louis Brugère, Raymond and André Richaume, and François Lotte. Some of the workshop's bows are branded with Ouchard's name, but many bear the stamps of the firms who bought them. Sticks are usually round and can be of very fine quality, especially those produced in collaboration between father and son.
This particular bow is in excellent condition. The round stick is ebony and silver mounted. Weight: 63.6 grams. This bow is certified by Isaac Salchow of NY, NY.