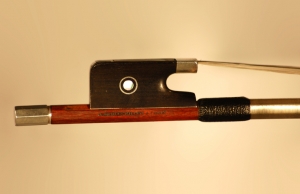 Description: Son of Roger Millant, Jean-Jacques Millant was born in 1928. After WWII, Millant served his apprenticeship with Morizot Frères until 1948. In 1950, Millant returned to Paris; perfecting his craft under his father and uncle before setting up his own account in 1951. While in Paris, Millant was awarded the “Un des Meilleurs Ouvriers de France” the highest honor for French craftsman. Even after his passing in 1998, his legacy remains as one of the leaders of the new French school of the second half of the twentieth century. This particular bow is fine example Millant’s workmanship. Even playing stick, strong but not overwhelmingly powerful. Weight: 81.3 grams