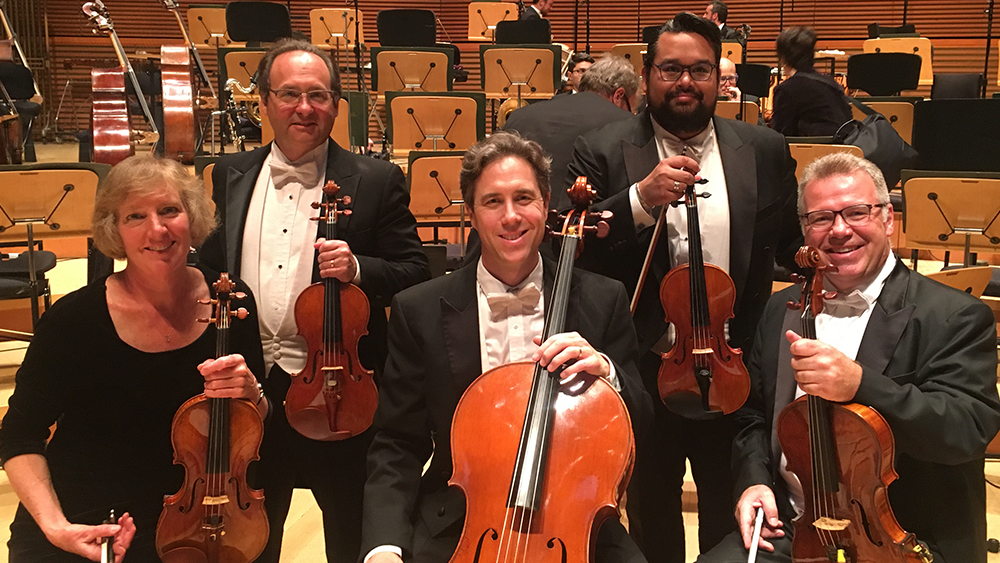 Five stellar Los Angeles Philharmonic musicians - three violinists, a violist and a cellist - who perform on instruments crafted by Los Angeles-based luthier Eric Benning, recently gathered to pose together for a special photo.

“This is one of the kindest and most thoughtful gestures ever,” said Benning. “A complete but welcome surprise.”

“I was excited and honored when Jonathan Karoly acquired one of my cellos over 15 years ago. Over the past few years, high-profile musicians had been acquiring my instruments, but of course there’s something special about members of the LA Phil acquiring them and performing on them.”

Karoly, who plays on a Stradivarius-model cello crafted by Benning, joined the Los Angeles Philharmonic cello section in 1997 when he was just 23-years-old.

“What I love about Eric’s cello is the combination of quality, power and the ease of playing,” said Karoly. “It projects extremely well and it allows me to play with many different colors. It is a real joy to play in that regard.”

Renowned violinist Vijay Gupta was next to acquire a Benning-crafted instrument, a 2015 Bergonzi-model violin. Vijay was one of several musicians who Eric would ask to trial his new instruments upon completing them and offer feedback.

“Eric would hand me one of his fiddles and say, ‘Hey I just finished this violin,” said Vijay. “Play on it for a while.’ I remember last Summer I played on a Balestrieri model violin and I just didn’t want to let it out of my hands.”

Vijay, who regularly performs on the LA Phil’s 1731 Domenico Montagnana violin required a loaner from Benning Violins while Eric performed maintenance on the Phil’s almost 300-year-old violin. The loaner was the 2015 Bergonzi, crafted with 1940’s Bosnian maple and 1920’s Italian spruce.

“Eric said ‘I just finished this Bergonzi model. Why don’t you borrow this?’”, recalled Vijay. “Again, it was like, this is even more something I didn’t want to let out of my hands. It was at that time that I just realized, wow, this is something that has to happen. There was no feeling in my gut of, ‘Oh is this the right thing to do?’ It was the most natural thing and Eric made it so, so easy.”

Violinist Stacy Wetzel, a member of the first violin section of the Philharmonic, acquired her Benning-crafted instrument in 2015. She commissioned a bench copy to be made modeled after an instrument crafted by Turin master Giovanni Pressenda.

Mitchell Newman, another first violinist who has had a long-standing relationship with the Benning shop, acquired his Guarneri-model violin in 2016.

“I happened to walk in through the back door of the Benning shop. Eric was stringing up this instrument for the first time,” Newman recalled. “As usual, Eric likes me to play his instruments just to see what they sound like. This hadn’t been played. The strings had just been put on. I tried it and from the very first note, I felt like it was my violin.

“It was hard to believe. It sounded so good. It was so colorful and strong and responsive right away. I took the violin and started to fall in love with it. It had all these great qualities and more to be had. It was like it was made for me somehow.”

Violist Mick Wetzel, a longtime member of LA’s storied orchestra - and husband to violinist Stacy Wetzel - is the latest Benning owner. His viola, completed by Eric in mid 2017, was a commissioned instrument, a bench copy of a viola crafted in 1545 by luthier Peregrino Di Zenetto.

“It was astounding to have a 500 year old instrument on my bench,” said Eric, who began crafting the instrument in 2016. “It’s a completely different style than I normally make in every sense. It was a fun and challenging commission and it stretched me and showed me new ways to approach making. I’ll always appreciate Mick for giving me that opportunity. He was very pleased with the viola, and so am I.

Aside from his LA Philharmonic duties, Wetzel has worked as a chamber music coach at the USC Thornton School of Music and taught viola performance on the faculty of UCLA. He currently teaches viola performance at California State University Fullerton.

To Eric Benning, the idea that this group of musicians would take the time to pose and take this photo for me, is so kind and thoughtful.

"Make no mistake," said Benning. "I'm deeply honored, proud and, at the same time, profoundly humbled to have musicians of this caliber appreciate and play my instruments."