The Story on Aluminum Violins, Violas and Cellos 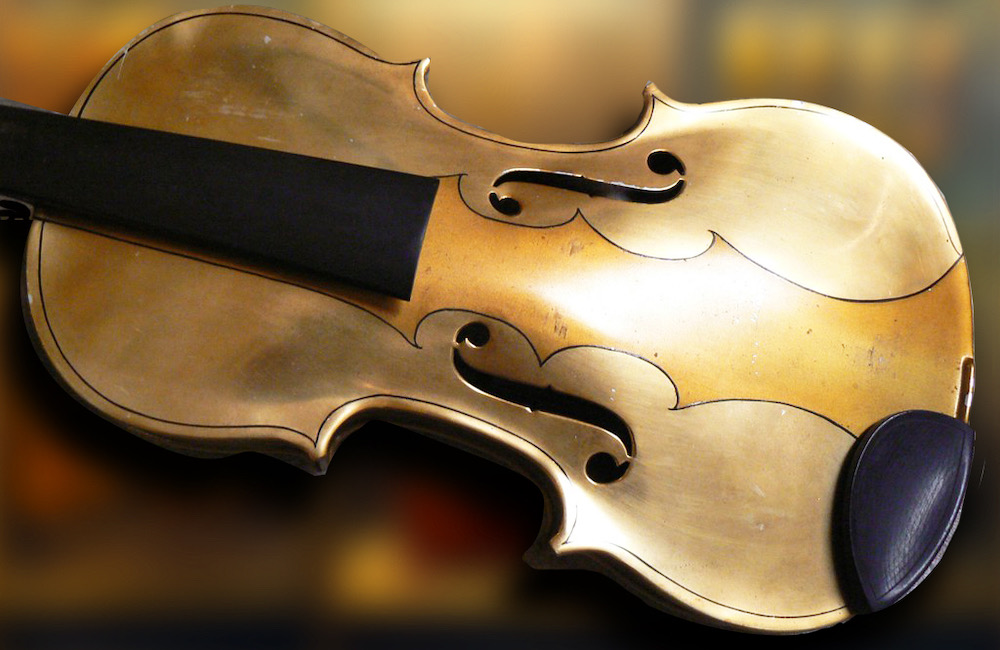 Here’s to thinking outside of the (string peg) box. But from a 21st century perspective, covering the aluminum with faux wood was a poor aesthetic choice.

Perhaps one of the more curious aspects of musical expression is the unfettered creativity of instrument makers. It began with plucking strings stretched across the hard shell of gourds that, arguably, led to Stradivarius violins and electric guitars.

So it was a natural part of violin construction that in the late 19th and early 20th centuries a number of instrument manufacturers turned to aluminum to replace wood in violins, violas, cellos and string basses. It’s fair to note the material never went beyond a niche following, never adopted by the great virtuosos, and never achieved great value (from a recent check on eBay the highest price found was $5,000 for each of two in a collection). Furthermore, the renowned violin makers crafting fine stringed instruments stuck to crafting them from wood in their storied violin shops.

The first American patent for aluminum violins was issued in 1891 to Alfred Springer in Cincinnati, Ohio. It was made by machine, using aluminum for the body but wood for the neck and fittings. Other companies (operating around the same time, evidently without patents) made aluminum violins, guitars, mandolins, fiddles, banjos and zithers: they were the Aluminum Company of America (ALCOA, distributed by the Aluminum Musical Instrument Company), C.W. Hutchins Manufacturing Company, Barrows Music Company, and luthier (handmade violinmaker) Edgar l’Allemand of Milwaukee, Wisconsin. This was all at the same time that aluminum horns as amplification devices were attached to “phonofiddles,” making the violin an imitation of the newly devised and wildly popular Victrola phonographs.

Of course, there was a difference in the sound quality – wood and aluminum vibrate differently – so what was the motivation for using aluminum? Getting beyond creative experimentation, it had to do with resiliency and eventually, cost. The delicate nature of wood, its temperamental reaction to humidity, and maintenance were initial considerations. Later, during the economic disruptions of world war and the Great Depression, wood was in shorter supply. For a time it was considered supporting the war effort to forgo wood for aluminum, the latter of which is plentiful in nature.

Cellos, violas and the double basses were also made of aluminum. In fact, the use of the metallic material in these instruments was particularly advantageous because larger instruments otherwise required more wood.

Many of the earlier models had a faux-wood surface applied to them to give them the appearance of being made of wood. This ersatz treatment gives testimony to the fact that the makers and players wanted to use real wood instruments. In more modern applications, the high gloss shine of metal fits a punk (or steampunk) aesthetic that takes, intentionally, the instrument and its music far away from a Bartok violin concerto.

Some of the 1930s aluminum violins also incorporated Bakelite, the miracle synthetic of that era that was exceptionally popular in household items and industrial applications. Again, kudos to the creativity of musical instrument makers who look past tradition to identify new ways to make old things. Aluminum might have been the material choice 100 years ago – and there’s no telling what it will be 100 years from now.