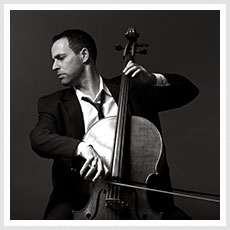 A true musical rarity. As a performer, Jacob Szekely is one of the few legitimate improvising string players in the world, and one of only a handful of cellists who has developed a jazz/funk concept on his instrument. In addition to being in great demand as a sideman, performing with the likes of Mary J Blige and Jay Z, Jacob performs regularly with his own groups including: Supernova (jazz/fusion quartet), The Eartha Austria Trio (electric jazz), Quarteto Nuevo (world music), Uncle Daddy (acoustic pop) and Yellow Light Go (singer songwriter). Jacob is also active as a composer and arranger and has collaborated with a wide range of artists and ensembles from string quartets and world music groups, to commissions for chamber orchestra and children's choirs.

Much in demand as a studio musician, Jacob has played in over one hundred national TV spots. Mr. Szekely is most widely associated with the television music of Bear Mcreary, performing in string quartets for such hit TV shows as Battlestar Gallactica, and most recently in an electric string ensemble for The Sarah Connor Chronicles on Fox.

In addition to his performances, Mr. Szekely devotes his time to education and outreach. Szekely is co-founder and artistic director of String Project Los Angeles (SPLA), America's first and only music school dedicated to creative string playing. The school has been featured in Strings Magazine and International Musician and has hosted master classes with a virtual who's who of the creative string world. Under Mr. Szekely's leadership, String Project continues to grow as a resource for the alternative string playing community throughout the country. In addition to teaching at String Project, Mr. Szekely travels throughout the country as a Yamaha Clinician performing and educating string players and teachers alike. Mr. Szekely is a Yamaha clinician, and is endorsed by NS Design and Danish Professional Audio microphones. This past summer, Mr. Szekely was invited to be on the faculty of jazz violin master Christian Howes's Creative Strings Workshop (CSW) in Columbus Ohio.