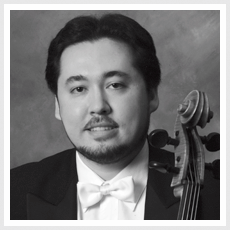 Praised by the Kansas City Star for his “sweet, sensuous tone and a sophisticated feel for long-breathed lines,” principal cellist Mark Tsuyoshi Gibbs holds the Robert A. Kipp Chair in the Kansas City Symphony.

He has appeared as a soloist with the Kansas City Symphony, including on the Symphony's 2015 all Saint-Saëns disc from Reference Recordings, to critical acclaim.

He is proud to be known as a “Fine Kansan Cellist” (Audiophilia Online Magazine) and currently resides in Olathe, Kansas, with his wife, Kansas City Symphony principal second violinist Tamamo Someya Gibbs, and their daughters, Mika and Maho.