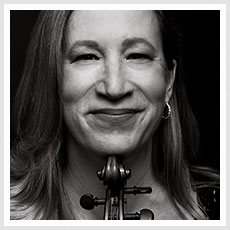 Violinist Colleen Coomber is a native of Los Angeles, California. Colleen began the violin at age 6, studying with Lily Mahler Epstein, Sybil Maxwell and Elizabeth Holborn. Studying with Alice Schoenfeld, Colleen earned both a Bachelors and Masters of Music in Violin Performance at USC. She received orchestral training in both the American Youth Symphony and Debut Orchestras, holding concertmaster and principal chairs. Colleen is currently a free-lance musician in the Los Angeles area, playing regularly with the Long Beach Symphony, Santa Barbara Chamber Orchestra and several others. She now holds the position of Assistant Concertmaster of the San Bernardino Symphony and is Principal Second Violin of the Downey Symphony. She is married to the notable trombonist Robert Coomber and is the proud mom of two sons, Christopher and James.