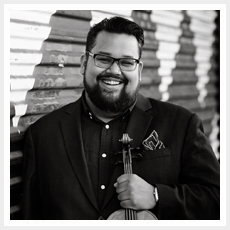 Violinist Vijay Gupta joined the Los Angeles Philharmonic in 2007 at the age of 19, after completing a Master’s degree in Music from Yale University, and a Bachelor’s in biology from Marist College. His principal teachers have included Glenn Dicterow and Ani Kavafian. Gupta frequently appears on the Philharmonic’s Chamber Music and Green Umbrella series, and is actively engaged in various LA Phil educational outreach initiatives. Vijay made his solo debut at the age of eleven in Tel Aviv with the Israel Philharmonic Orchestra under the baton of Zubin Mehta, has performed as a guest concertmaster with the Los Angeles Opera, Orquestra Comunitat de Valencia (Spain), and recently, as guest Leader of the Philharmonia Orchestra of London at the prestigious Three Choirs Festival in Worcester, U.K.

Gupta is a passionate and dedicated advocate for the presence of music in ostracized communities. He founded and serves as Artistic Director for Street Symphony, a non-profit organization dedicated to bringing free, live music to men, women, and youth living in homelessness and incarceration. A gifted spokesperson for human and mental health advocacy through a musical medium, Gupta is a TED Speaker, and a 2011 TED Senior Fellow. He is represented as a speaker by the Lavin Agency.

Vijay currently plays on a 1731 Domenico Montagnana violin, on generous loan through the Los Angeles Philharmonic Association. He also ownes and plays on a violin crafted by Los Angeles violinmaker Eric Benning. He lives in Angeleno Heights with his wife Samantha Lynne, and their Siamese cat, Louie.