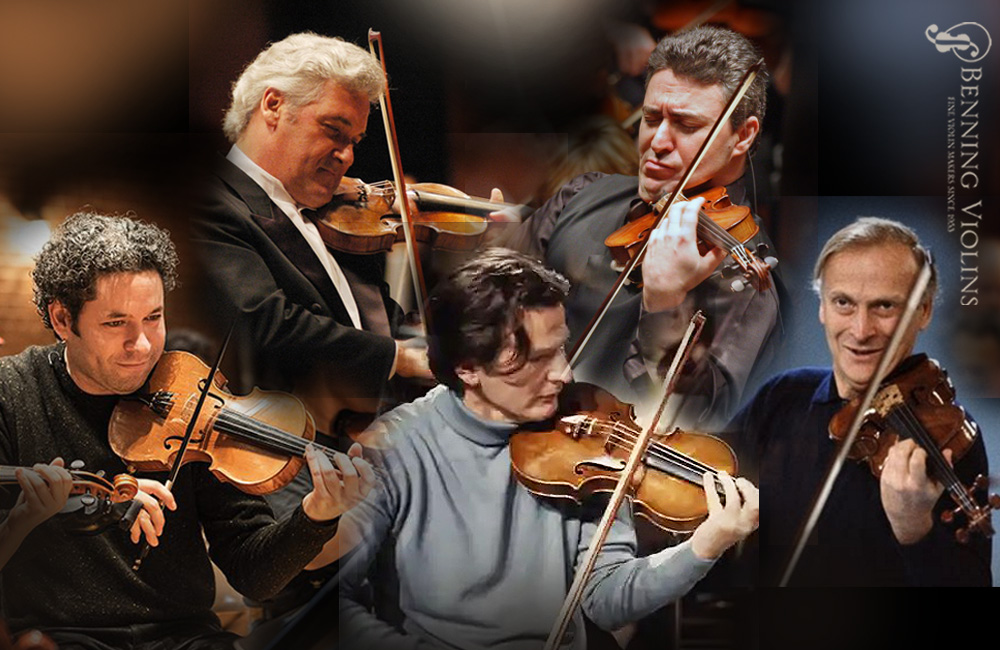 As the orchestra concertmaster is always a violinist, it seems natural that great conductors are often great violinists. Here we list some of the most notable.

When a feature writer for Great British Life magazine interviewed Sir Neville Marriner, the English violinist who founded and conducted the orchestra at the Academy of St. Martin in the Fields, in 2008, he asked the aging virtuoso what he would like written on his tombstone. Pausing for just a moment, Marriner replied simply, “Follow the beat.”

That could be the most basic of instructions for the aspiring instrumentalist of any type, violinists included. But it’s also something a conductor might say, which Marriner was as well. He wasn’t alone in becoming known as much for conducting as he was a violinist.

There is a handful of violinists who proved equally adept with the conductor’s baton as they were with their fine violins and fine violin bows. Standouts among them include:

Gustavo Dudamel – Among the younger (born in 1981) violinists-turned-conductors, he ventured onto the podium already at the age of 14, where he was studying in his native Venezuela. By the age of 19 he was appointed the music director of the South American country’s national youth orchestra, and five years later was developing a global reputation, with multiple invitations to conduct in European capitals. He is now the music director of the Simón Bolívar Symphony Orchestra, the Los Angeles Philharmonic, and the Opéra national de Paris.

Maxim Vengerov – Born in Russia (1974) and now an Israeli, Vengerov won the International Karol Lipinski and Henryk Wieniawsk Young Violin Player Competition at the age of 10. His career took him throughout Europe, Asia and Africa before being appointed in 2010 as the first chief conductor of the Menuhin Festival Gstaad Orchestra.

Pinchas Zukerman – Born in 1948 in Tel Aviv to Holocaust survivors, the accomplished violinist and violist first played the recorder (age 4), then the clarinet, and next the violin. Studying at the Julliard School under Isaac Stern, he made his New York City debut at the age of 15, and at 19 soloed under the direction of Leonard Bernstein with the New York Philharmonic. He first conducted (at age 22) the English Chamber Orchestra and has been the principal guest conductor of the Royal Philharmonic Orchestra since 2009.

Georges Enesco – Born in 1881 in the Kingdom of Romania, Enescu is considered perhaps the greatest of musicians ever from that country – so much so his picture is on the country’s official currency and the village of his birth was renamed “George Enescu” in his honor. His debut as a conductor was leading the Philadelphia Orchestra at Carnegie Hall in New York City.

Yehudi Menuhin – A prodigy from his first performances as a child, the New York born (1916) violinist had an illustrious career as both a player and a conductor. But he might be most famously remembered for his performances in World War II for Allied soldiers and surviving inmates of concentration camps shortly after their liberation in 1945. While criticized for playing under the direction of a German conductor in 1947 with the Berlin Philharmonic, Menuhin clarified that the conductor (Wilhelm Furtwangler) had saved Jewish musicians fleeing Nazism, and that music in Germany transcended the Nazis.

Lorin Maazel – Somewhat the exception in this list, Maazel is best known as a conductor (and less so as a violinist) as he began studying conducting at the age of 7 and his debut as a conductor was in Los Angeles at age 8. Later, he conducted orchestras from Cleveland to New York, Los Angeles, Pittsburgh, and toured internationally most of his life (1930-2014). It bears noting his parents both had musical careers, and his grandfather, Isaac Maazel (1873-1925), was the concertmaster violinist with the Metropolitan Opera.

Eugène-Auguste Ysaÿe – The Belgian-born (1858) violinist was in his time referred to as “The King (or Tsar) of the Violin,” and was the son of a local orchestra conductor. His turn to conducting at midlife was driven in part by health challenges, particularly in his hands, but he embraced that along with teaching and composing for the remainder of his life.

Other violinists who are noted also as conductors include Gideon Kremer and Itzhak Perlman.

Perhaps the work of Marriner lives on most prolifically, as it seems his early performances as a violinist AND a conductor of the Academy of St. Martin in the Fields provides ample work that gets played again and again on classical radio programs. He followed the beat – and the beat now follows him.